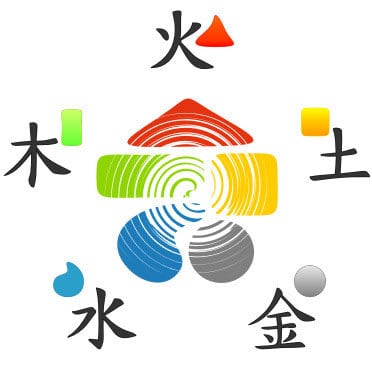 Five Elements or the Five States of Change

The Theory of the Five Elements – Wu Xing (Chinese: 五行; pinyin: wǔxíng), often shortened to Five Elements, is the concept in Chinese philosophy conceiving the world as dynamic states, or phases, of constant change.

Taoism theories use symbols to describe phenomens of reality, hence each of the Five Elements represent an aspect of a dynamic process, a processe’s phases of change. In this sense, Wood is not only the actual wood of a tree as defined by the substance, but describes the character, the dynamic state, the elemental force of the element.

The basic substances of the material world according to the ‘Theory of the Five Elements’ are Wood, Fire, Earth, Metal and Water.
All material things are made of a single or a combination of the Five Elements, since these are the fundamental components.
All Five Elements are equally important and should form a balance, while being in constant move and cyclical change (phases).

Each phase’s peak already consists of its decline, then forwarding the prior received/ gathered (chi) energy from one element to the following element.
The ‘generating’ or ‘controlling’ element is building up the energy to its own peak, before the decline starts again.
This interactive process is being constantly repeated, hence forming a never ending, though balanced circle.

Not only time changes things, but since everything changes within itself anyway, the ‘Theory of the Five Element’ is simply an observation of natural, creative changes; and it is the natural world confirming that all forces and energies in nature can be in constant smooth and harmonious transition from one phase to another – just as one season ‘becomes’ the next.

Each existing material, combined of parts of the Five Elements, shows a pre- domination of one of the Five Elements and is assigned an abstract generalization, hence can be classified accordingly.
Associations were later made with the human body and its organs and senses, colours, biota, foods etc. (“The East generates wind, wind generates wood, wood generates sour, sour generates liver, liver generates tendons….”.)

WOOD (Chinese: 木, pinyin: mù)
Wood is the most human of the elements. It is the element of spring; the creative urge to achieve – which can turn to anger when frustrated. It is associated with the capacity to look forward, plan and make decisions, hence growth and expansion.
Wood energy is rising, expanding, and is the force of growth and flexibility, hence thecolour associated with Wood is green and a rectangled shape.
This element represents all the activities of the body that are self regulating and/or function without conscious thought; i.e. digestion, respiration, heart beat and basic metabolism.
The liver (converting food into fuel which is then supplied to the muscles, tendons and ligaments) is associated to the Wood element as well as the gallbladder.
Wood represents as well the direction East, the planet Jupiter and is symbolized by an Azure Dragon.
Wood ‘governs’ the Chinese Zodiac signs Tiger, Rabbit and Dragon.

FIRE (Chinese: 火, pinyin: huǒ)
Fire is the element of heat, summer and enthusiasm; nature at its peak of growth, and warmth in human relationships.
Represented by the colour red and a pointed, triangled shape, Fire’s motion is upward, hence is associated with dynamic, energetic, passionate, enterprising energies.
Fire is the symbolic of combustion and this represents the functions of the body that have reached the fleeting moment of maximum activity; indicating that decline is then inevitable.
The element is associated with the heart, the circulation system and is related to the tongue.
Fire represents the direction South, the planet Mars and is symbolized by a Vermilion Bird/ (Red) Pheasant.
Fire ‘governs’ the Chinese Zodiac signs Snake, Horse and Sheep.

EARTH (Chinese: 土, pinyin: tǔ)
Earth is the element of harvest time, abundance, nourishment, fertility, and the mother to child relationship. This element is also regarded as central to balance and the place where energy becomes downward in movement, a change of seasons. It is the symbol of stability and being properly anchored.
Represented by the colour yellow and a square shape, Earth’s motion is patient, reliable, logical, governed by service and duty to others, militaristic, stubborn, very energetic.
Earth is associated with the digestive system, stomach (middle of the body), the spleen and is related to the sense of taste.
Earth represents the direction Centre (Yellow Earth, China – Middle Land), the planet is Saturn, and is symbolized by the Yellow Dragon.
Earth ‘governs’ the Chinese Zodiac signs Dragon, Rat, and Ox. Earth is the central balance of the elements and can lend qualities to all 12 animals as well.

METAL (Chinese: 金, pinyin: jīn)
This category includes the Western idea of the air element. It is the force of gravity, the minerals within the earth, the patterns of the heavenly bodies and the powers of electrical conductivity and magnetism. Metal has structure, but it can also accept a new form when molten.
Metal energy is consolidating and with inward movement, like a flower closing its petals.
Represented by the colour white and round shapes, Metal’s motion is determined, forceful, strong, unyielding, self- reliant, reserved and sophisticated.
The symbol of metal is one of a cutting and reforming action, but it is also regarded as a solidifying process, hence it is associated with Autumn.
Metal is associated with the lungs, respiratory system and is related to the nose.
Metal represents the direction West, the planet is Venus, and is symbolized by the White Tiger.
Metal ‘governs’ the Chinese Zodiac signs Monkey, Rooster and Dog.

WATER (Chinese: 水, pinyin: shuǐ)
Water is the source of life on this planet. Water has the capacity to flow, infinitely yielding yet infinitely powerful, silent and still, awaiting, flexible, ever changing, a stored potential and often dangerous (flood’s devastation) with the capacity also to nourish and cleanse.
Likewise it is the fluid (the main component of the body) which nourishes and maintains the health of every cell. Water corresponds to the skeletal and excretory system as well as to the vital fluids, i.e. blood, lymph, mucus, semen and fat and is related to the lung.
The kidney is especially linked to this element.
Represented by the colour black/ blue and a wave like shape, Water’s motion is downward, fluid, secretive, intuitive, compassionate, sensitive, gentle and creative.
Water is the ultimate yin; quiet, cold; representing the resting time of winter.
In human psychology the element governs the balance between fear or being exploited and the desire to dominate.

Water represents the direction North, the planet is Mercury, and is symbolized by theBlack Tortoise. Water ‘governs’ the Chinese Zodiac signs Pig, Rat and Ox.

The characteristic of each phase (new yang through to full yin) is determined by what happens in the natural world during each associated season. One season after another plays its role in the cycle of the year by just doing what it does when it does it and then smoothly moves on to the next. It is the smooth and harmonious transition from one phase to another that is important, along with the balance between them.

Crystals for 2016
Symbol for Zen

Why is it important?

END_OF_DOCUMENT_TOKEN_TO_BE_REPLACED

A Complementary Bracelet for your Mum this Mo...

END_OF_DOCUMENT_TOKEN_TO_BE_REPLACED

10 Ways To Raise Your Energetic Frequency

END_OF_DOCUMENT_TOKEN_TO_BE_REPLACED

We will provide their services to you, which are subject to the conditions stated below in this document. Every time you visit this website, use its services or make a purchase, you accept the following conditions. This is why we urge you to read them carefully.

Content published on this website (digital downloads, images, texts, graphics, logos) is the property of GEMSTORY WORLD PTE LTD and/or its content creators and protected by international copyright laws. The entire compilation of the content found on this website is the exclusive property of GEMSTORY WORLD PTE LTD, with copyright authorship for this compilation by GEMSTORY.

By visiting this website, you agree that the laws of the SINGAPORE, without regard to principles of conflict laws, will govern these terms and conditions, or any dispute of any sort that might come between GEMSTORYWORLD PTE LTD and you, or its business partners and associates.

Any dispute related in any way to your visit to this website or to products you purchase or download from us shall be arbitrated by state or federal court SINGAPORE and you consent to exclusive jurisdiction and venue of such courts.

Visitors may post content as long as it is not obscene, illegal, defamatory, threatening, infringing of intellectual property rights, invasive of privacy or injurious in any other way to third parties. Content has to be free of software viruses, political campaign, and commercial solicitation.

We reserve all rights (but not the obligation) to remove and/or edit such content. When you post your content, you grant GEMSTORY WORLD PTE LTD non-exclusive, royalty-free and irrevocable right to use, reproduce, publish, modify such content throughout the world in any media.

We grant you a limited license to access and make personal use of this website. You are not allowed to download or modify it. This may be done only with written consent from us.

We reserve all rights to terminate accounts, edit or remove content and cancel orders in their sole discretion.